When the North reminds you it's NORTH 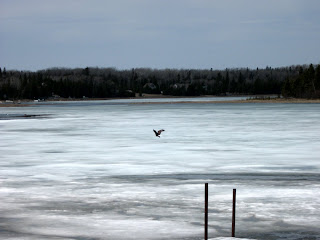 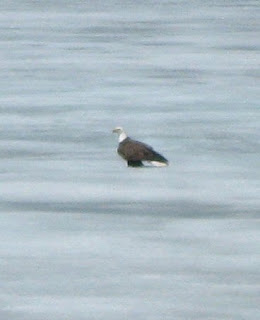 . . . .okay, I'm kidding. I took these pictures the week after Easter. The eagle landed on the ice, sat there for a few minutes--long enough for me to fiddle with my camera--and then took off.

The ice didn't move out until April 23. We had a ridiculously cold winter up here this year, so looking forward to spring became a full-time occupation. Except spring never arrived. Not in March, anyway. Not in April, either. May looked promising for a couple of days but turns out they were just teasers. Back to endless weeks of cold and wind and fog.

Now it's the end of June (How could that be?), and we've had maybe ten warm days at the most since we got back on the island in mid-April. Week before last we had two HOT days. Into the 80s. But now it feels like April again.

I shouldn't complain, I know. I've looked at those oranges and reds on the Weather Channel's maps and I guess I should be happy the heat waves are missing us. But wind and cold and fog at the end of June doesn't seem at all like summer. I can't believe we're less than a week away from the Fourth of July. 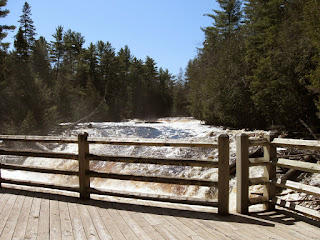 We went to the Lower Tahquamenon Falls near the end of April . Plenty of snow in the deep woods and along the shaded boardwalk, but the lookout deck was sunny and clear. Huge runoff this year, making for spectacular rapids. Pictures just can't do justice to the fury of all that water! 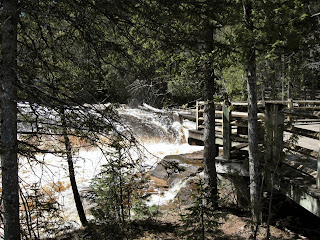 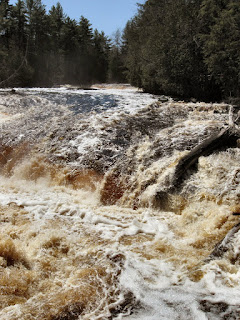 Okay, just ignore my grumbling here. There isn't a place on earth I would rather be. The spring bird migration was wonderful. This oriole hung around for almost a week--really unusual. They usually show up one day and are gone the next. They'll hang around hummingbird feeders as long as there is a perch for them. They love oranges, so we hang a half from a nail in a tree. I hear they love grape jelly, too. Maybe I'll try that next year. 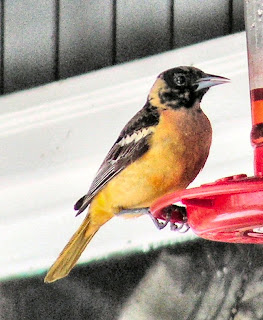 The morel mushrooms tried to hide on us, but we found them. Fried them up in a little butter and olive oil and oh, did we go looking for more! 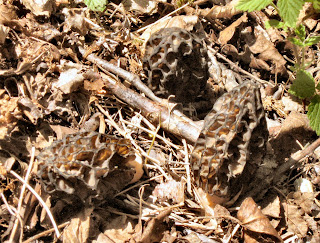 I have a lot of catching up to do after such a long time away. I'll be back!