Will this hummingbird live another day?

For a couple of days now, we've had hummingbirds at our feeders. Or maybe we've just had one hummer that comes around a lot. I don't know, they all look alike to me. But this is what's been happening: The hummer I've been watching for a couple of days now doesn't even go near the feeders reserved for hummingbirds. That is, the ones with bright red nectar in them. This one, instead, goes to the lighthouse-shaped feeder filled with sunflower seeds. The lighthouse is red and white-striped and doesn't look the least bit like a flower, so what draws it, I can't even imagine.

I worry for it, though. What kind of survival instinct is this tiny, little bird lacking? I've heard that hummers have to spend most of their waking hours looking for food in order to sustain an ultra-high metabolism. Their little wings whir like helicopter blades constantly, and it's a rare thing to see them still. You can count their inactivity in seconds.

There are days when I wish I could be a hummingbird just for an hour. Think of the things I could accomplish! But how do they use all that energy? They use it looking for food! (What a waste. . .but I know the feeling.)

I was thinking about drenching that lighthouse feeder with sugar water, but really, what would I be teaching that little dummy?

I thought about just taking the lighthouse feeder down, but how would the finches and chickadees feel about that?

No, I just have to ignore that silly hummer. If it can't find food that's only a few feet away while it's hammering away at that red wooden stripe, there's not much I can do to save it from itself. It's a tough world out there. The little guys have to learn that fast, or else.

I'm going out now to change the nectar in the feeder. Maybe some new stuff will finally draw it. It's all I can do.

Posted by RamonaGrigg at 11:24 AM No comments:

Don't let anybody kid you--website building is not all that easy. I'm still tweaking, but had to let it go over Memorial Day weekend. Something happened on my host site and I wasn't able to edit anything. It was just as well, because we had company all weekend and I was happy to spend all my time with them. It was a gorgeous weekend. A real miracle, considering it was cold before they all got here on Thursday night and turned cold and ugly again after they left on Monday morning. They brought the good weather with them, and then took it back. Not fair! 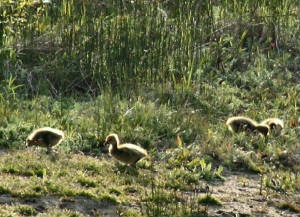 The Canada geese babies were on our shore the other day. Fuzzy and yellow and scampering everywhere. They grow so fast, within a week they'll look like teenagers. 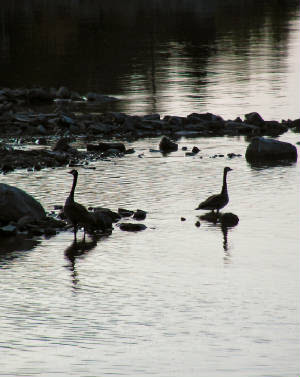 The parents looked frazzled, and why not? They spend all their time looking out for enemies and trying to herd those little chicks back to their sides.

We'll let them stay for a while, but once those chicks have grown a little, we'll be shooing them away. They think "beach" means "latrine" and we can't have that.

Posted by RamonaGrigg at 11:23 AM No comments:

This is what I laughingly call my "Blog", and as soon as I figure out how a blog is different from just any old musings page, I'll probably put it to better use. Right now, I'll just use it to try and justify my need to start this website for cabin owners and dwellers. It's something I've been thinking about for years now but didn't have the ability or the energy to try until now. People kept telling me that building my own website was easy. . .that anyone could do it, and to prove it they pointed me toward MySpace and YouTube and Blogger and WordPress, and any number of other places where people who thought they had something to say could now say it round the world with dizzying ease.

Well, I'm not 16 anymore so it wasn't easy--that's why it took so long. Sadly, the kinks aren't out yet, but I'm not getting any younger and if I want to enjoy the benefits of this Cabin Community I realize I'm going to have to hustle it along.

When I was growing up, we still had dial phones and party lines. I was into puberty before we had our first TV. I've had a computer since soon after Windows came on the scene, but I used it like I use my car. I don't need to know what's under the hood in order to get where I'm going. So convincing this computer that it should change its ways and do what I want now, even though I don't know what I want, has been the kind of thing nightmares are made of. Computers are inherently mean. You have to constantly be figuring out ways to get around that. It takes time.

I was a writer with no particular fame or fortune until we retired and moved from the city to a small cabin in God's Country--Michigan's Upper Peninsula. It's been almost 15 years now, and the honeymoon still isn't over. I love living where I live and I love my cozy little cabin. (The emphasis on little.) But I'm not alone--everyone who is lucky enough to own (or even use) a cabin, camp or cottage feels privileged in some way to be able to be a part of that cabin experience.

Some of us live in our cabins full-time, while others of us feel lucky if we get to use them two or three weeks out of the year. What we have in common is that all of us cherish these places, even though eventually the dawn breaks--along with everything else--and cold reality sets in: Our cabin is a moody, flighty building and nothing more. On its good days, it makes us supremely happy, but on its bad days--look out.

Our idea of "one-upping" is to see who's had it worse this year. We don't try and pretend that all's hunky-dory in the cabin world. Everyone who's ever had one knows that's not so. Things happen, usually in threes, each catastrophe worse than the first.
But here we are--oddly attached to our little places, living under conditions we might call "quaint", but others would call "primitive" (or even "grim").

To us, shabby is in, pristine is out. Flaking paint, a little rust, a grimy patina. . .it fits exactly right with our surroundings.

Most of what gets done in our cabins gets done by us. We cook, we clean, we fix, and we do it happily (most of the time) because we're laboring in a setting some people can only dream about.

Our dish drainers stay on the drainboards and most of the time we just keep recycling the dishes we've stacked there. Our sheets and towels snap in the wind, fastened to taut clotheslines with clever spring-loaded wooden clothespins.

When it rains, wet clothes hang inside from every hook and rafter and nobody cares. (Did you know you can dry underwear quickly by hanging it over a lampshade and turning on the light? It's a fact. But most people only try it with CLEAN underwear.)

Whether we're pulling weeds or scrubbing decks or stacking wood, we can't help but feel like vacationers having another fun day. Let's face it. . . we're not like everyone else. And everyone else is not like us. I don't know about you, but I think that's a good thing.

Posted by RamonaGrigg at 10:32 AM No comments: