The Dance of the Cranes

*
*
"High horns, low horns, silence, and finally a pandemonium of trumpets, rattles, croaks and cries that almost shakes the bog with its nearness, but without yet disclosing whence it comes. At last a glint of sun reveals the approach of a great echelon of birds. On motionless wing they emerge from the lifting mists, sweep a final arc of sky, and settle in clangorous descending spirals to their feeding grounds. A new day has begun in the crane marsh. . .

. . .Our ability to perceive quality in nature begins, as in art, with the pretty. It expands through successive stages of the beautiful to values as yet uncaptured by language. the quality of cranes lies, I think, in this higher gamut, as yet beyond the reach of words. . .

. . .The sadness discernible in some marshes arises, perhaps, from their having once harbored cranes. Now they stand humbled, adrift in history."

In mid-April, when the ice was just leaving, we were out walking our road and heard strange noises coming from the marshy place around the bend.

Through the bare branches, we saw two sandhill cranes--a rare sight around here. 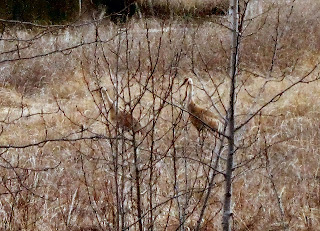 For once, I had my camera with me and as I started to take pictures, the male of the pair began doing a mating dance. (The pictures are grainy because I was carrying my smaller, less weighty camera with the shorter lens, but I was afraid to get too close and scare them away.) 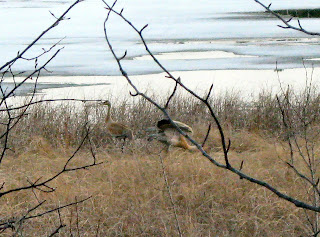 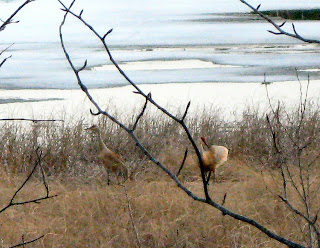 There is something so primitive about these birds--still so wild and not yet dependent on humans, as the Canada Geese have become. They're rare enough not to be nuisances yet--though in an earlier blog, I posted pictures of hundreds of them in a farmer's field. That was two years ago, and we haven't seen anything like that again. Now and then we hear their incredibly loud calls and see them flying overhead during the spring fly-0ver, but we are just a stop along the way to a more permanent summer home.

I think I like it that way. I want to be able to be surprised by their calls and to be astonished at their size. I want their numbers to be small enough here so that we humans don't feel the need to try and feed them to keep them around, so that, ultimately, hunters won't feel the need to treat them as nuisances and have an excuse to kill them.

There are elements of wildness that have nothing to do with us--that can survive very well, often better, without us--but that we crave, possibly because something in our primal, primordial past cries out to us. I think it's why so many of us choose to either live in or keep places that are inconvenient at best and crudely inadequate at worst. We crave the quiet and the tranquility of the boondocks, the wildness of nature surrounding us, and we take it where we're able to find it.

Times are desperate here in my sad, beautiful Michigan. State unemployment rates are in the double digits, and I heard a report just this morning that jobless numbers in Detroit are over 24%. Even from this distance--350 miles away and on a separate peninsula--my heart is with those people. 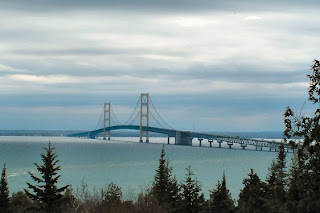 The fear is palpable in the city. Foreclosure notices, red flags on those unfortunate doors, dot every working-class neighborhood and there isn't a person who isn't touched in some way by the current mushrooming joblessness. In Michigan, auto-workers and other blue-collars have always headed north out of the cities to their own little patches of land. You don't have to go far in Michigan to get to where the wild things are, and finding your own quiet breathing space is not a luxury for a factory worker, it's a necessity.

For every lonely hermit who goes quietly mad, a thousand city dwellers--not just in our cities here, but in every city--rage loudly, fiercely, dangerously into insanity. The wilderness, the quiet places, are there to quell that rage, to soothe their fears, to give them respite, even for a few hours or days.

There are people in power who don't understand this need, and I might feel sorry for them if not for the fact that their being clueless often means a surrender of our wild places to corporate interests. Any of us who value these quiet places of inordinate beauty, these sanctuaries for the human soul, cannot let that happen.

"Something will have gone out of us as a people if we ever let the remaining wilderness be destroyed; if we permit the last virgin forests to be turned into comic books and plastic cigarette cases; if we drive the few remaining members of the wild species into zoos or to extinction; if we pollute the last clean air and dirty the last clean streams and push our paved roads through the last of the silence, so that never again will Americans be free in their own country from the noise, the exhausts, the stinks of human and automotive waste."
— Wallace Stegner, The Wilderness Letter, written to the Outdoor Recreation Resources Review Commission, 1962 and subsequently in The Sound of Mountain Water (1969) 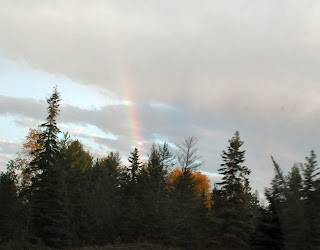 Posted by RamonaGrigg at 9:14 AM 2 comments: