When the local pests are still cute

*
*
So here's the thing:  We don't want Geese and Ducks using our beach as a latrine, which they seem to want to do, so we have to come up with ways to discourage them.  Bottle rockets may seem extreme to you, but consider this:  Our neighbor wants us to shoot the buggers.  And if we don't do it, she will.  So I have reluctantly agreed to the Bottle Rocket method in order to protect them from Pistol Packin' Grandma, but this time of year I reserve the right to declare a moratorium.  (PPG knows about this, too.)
This time of year there are babies out there, and there are enough scary things without us adding to their fears. 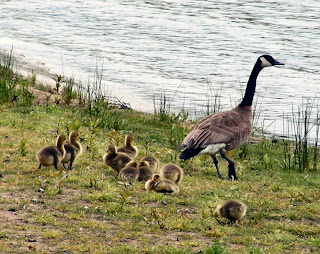 This year we've only seen two geese pairs with two babies each.  That's unusual and I have to wonder what environmental changes might be taking place now.  We're used to seeing eight to ten goslings following behind--at least at first.  Over time, either through predation or disease, the numbers dwindle, and I watch sadly as the families grow smaller and smaller. 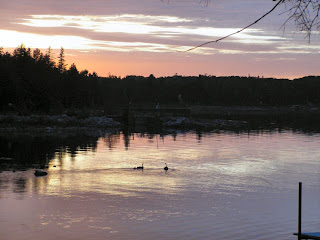 I'm no expert on geese, but I've been watching these nurseries over the years and I've seen several families swimming together as groups. I have to assume it's for mutual protection.   Sometimes the goslings paddle from one family to another and I know it's only a matter of time until one of the parents chases them back to where they belong.  There's a bit of a ruckus for a while, with both sets of parents getting their feathers ruffled before they calm down and get back to whatever they were doing.   But they are a community--no doubt about it.
Last year I saw this family of Goldeneyes.  I had never seen their babies before and this was a thrill: 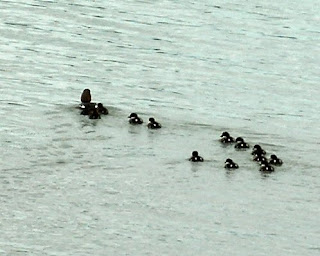 I'm still waiting to see a mama loon carrying her babies on her back.  They don't ordinarily come close to shore, so I may never get the chance.  But there's always hope.  I keep my camera close, just in case.
Posted by RamonaGrigg at 8:52 AM